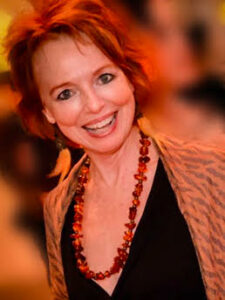 The field of meditation is undergoing a much-needed evolution to suit contemporary life – in particular, the wisdom and strengths of women.

Today, most meditation practitioners are women, and this has been true for over fifty years. In the past, meditation was primarily taught and practiced by men and was shaped to suit their bodies. Women were never included in the equation – until now.

Camille Maurine and Lorin Roche were the first to elucidate a woman’s experience in their groundbreaking book, Meditation Secrets for Women: Discovering Passion, Pleasure, and Inner Peace (HarperOne, 2001).

Excerpt from the Preface:

This book grew out of a lively conversation with my husband Lorin that began when we met in 1983 and continues to this day. We both teach meditation and often discuss the interplay of meditation with love, work, play, creativity, and health. One of our central subjects is how meditation can be integrated into the challenges and joys of modern life.

We both feel immeasurably blessed by the ancient traditions, particularly those of Asia. But meditation has been not just a man’s world but a monk’s world. For thousands of years monks have been the primary custodians of the knowledge of meditation and the creators of its techniques, so naturally it has been designed to meet their needs. Consequently, most teachings on meditation are still shaped by attitudes that worked in the distant past, in the Far East, for reclusive and celibate males. Far too little is known about what works for women, especially contemporary women. Meditation is slowly being adapted to the West, but the time has come for a new focus, one that specifically addresses women’s needs and strengths.

I believe these secrets are essential for every woman who wants to meditate, whether you’re a seasoned inner traveler or new to the journey. It is my hope that through them you will gain access to more joy and meaning, both in meditation and in life.

We each need to customize our practice so that it feels to us like coming home and bathing in the pleasure of simply existing. When we approach meditation in this way, the whole flow is utterly natural, and every aspect of meditation feels like an act of love. There is no one way to meditate, no one style, and we need to continually upgrade our tenderness and ability to love.

This Training is for women and anyone who loves women. We will be discussing practical tips on how to construct a daily practice that helps you to thrive, and if you are lucky enough to be in relationship with a woman, you may learn a thing or two about how to support her in being herself.

The Radiance Sutras, a contemporary version of the Vijnana Bhairava Tantra, comes from a tradition that, even a thousand years ago, considered women to be equal to or even superior to men as both students and teachers. It is based on a celebration of male and female polarities, and there is no competition, only complementarity. The presence of both men and women makes the teaching come alive. 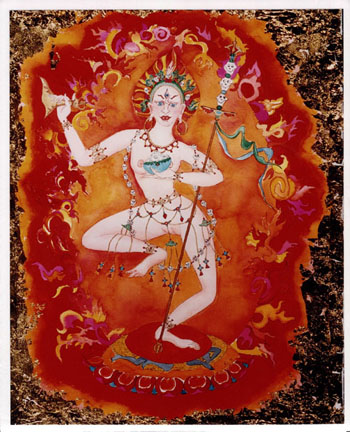 Kashmir Shaivism is a name sometimes given to this lineage, and Swami Lakshmanjoo was a living master in the oral tradition. Referring to the teaching presented in this text and related kundalini yoga texts, Lakshmanjoo writes, “Our Saivism teaches us that this thought can be practiced more fruitfully by women than men.” He cites Abhinavagupta (who was writing around 1000 AD) as saying:

“That attainment which is said to be achieved in one year’s time by those terrified is achieved in twelve days by those divine ladies who are established in the true path of Saivism.”

“Those terrified” refers to those who have awakened to the vastness of the universe and are dedicating themselves to liberation. These quotes are phrased a bit awkwardly, but I present them “as is” so you can see that these scholars perceived and gave credit to the gift many women have for the work.

These citations are from Kashmir Shaivism, by Lakshmanjoo, page 107, published by The Universal Shaiva Trust. The first quote above is from Jayaratha’s commentary on Abhinavagupta’s Tantraloka.

This was an unusually enlightened thought for the time, and is reminiscent of a perception expressed a couple of centuries earlier by Padmasambhava, one of the Tantric adepts who took Buddhism to Tibet, where he is known as Guru Rinpoche. Padmasambhava is thought to have lived from around 730 to 805 AD, and to have said:

“The basis for realizing enlightenment is a human body. Male or female, there is no great difference. But if she develops the mind bent on enlightenment, the woman’s body is better.”

Over the years, we have seen this again and again. A woman in our groups will simply . . . step into embodying her enlightenment. It is as if she is already awakened, and now she is letting it shine through every cell of her body.

We have also seen women recite one of these Sutras and embody it fully, transmitting the electricity of its revelation, and then ... keep going, improvising along the same lines, adding layers of deeply felt texture. Those of us who teach in this tradition have been marveling over the dynamic creativity flowing from modern women yogis and how they seem to have the originating current that is the source of the Vijnana Bhairava Tantra on the tip of their tongues.

If women are particularly brilliant at tantra yoga, men are gifted in a different way. The masculine tends to have a quality of slow and steady progress. Men have to work harder to gain the insights and embody the revelations. Because of this, once they step into their vibrant reality, it is more stable. These are only generic statements, and individuality always trumps the generic.

Another mystery is what I can only call universal initiation. So many people coming to yoga and meditation today seem to have already been practicing, secretly in their hearts, and showing up for a yoga class or workshop is just an external manifestation of an inner quest. Their bodies are vibrating with Shakti and Shaktipat. Beginners seem not to be beginners at all; they appear to have lifetimes of experience behind them and they show up ready, willing, and eager to jump in.

We must get ready and be always ready to welcome these radiant young people on their adventure.

*Abhinivagupta is considered one of the great geniuses of this tradition, author of Tantraloka and Tantrasara, and many other works. He lived from around 950 to 1016 AD, in Kashmir.

**There is kind of a pun here in that abhinava - अभिनव - has the meanings of "fresh, modern, blooming, tender, young, new." Abhinivagupta's teachings FEEL ultra modern, almost from the future rather than from the past. His teachings also invite us to be tender and fresh in our approach to experience, rather than jaded and burnt-out.

Stay in touch about our latest offerings, free online events, and trainings!